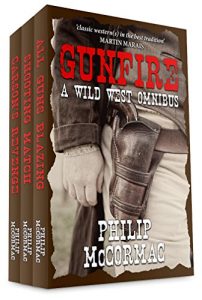 ALL GUNS BLAZING
Trouble follows cowhand Leo Postlewaite around, especially after he’s exiled from home. When vengeful outlaw Ignacio McKenna escapes from jail, he rides into town to terrorise Leo’s family and friends. Worse – when Leo’s girlfriend Imogen is kidnapped, he has no choice but to return home and face down his enemy with All Guns Blazing…

SHOOTING MATCH
Oliver arranges for his brother Owen to be ‘accidentally’ killed in a boxing tournament, but he manages to make a narrow escape. Rosalind and Celia help conceal him, but they quickly get taken prisoner by a group of outlaws. Owen immediately rides to their rescue – with Oliver and the crooked Duke murderous and in hot pursuit.

CARSON’S REVENGE
Carson has a long, violent history with the Mexican bandit General Rodriguez – and Carson’s determined to seek revenge. But when the young heiress he’s escorting is kidnapped by Rodriguez, he quickly realises he’s out of his depth. Can he get the better of the evil general?