QUIGLEY’S WAY UP AND RUNNING 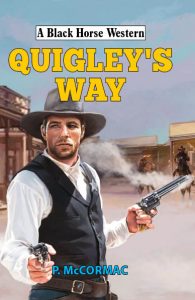 A dying man, Peter Barker asks Sheriff Quigley to deliver a message to his family. Quigley does so, only to find himself the target of range baron Huston McRae. McRae has in his employ gunslingers and wanted men. He controls everything in Gila County, including the local sheriff and doesn’t want an outsider nosing around in his affairs. And above all he doesn’t want Quigley helping Noreen Barker, Peter Barker’s widow. McRae sends his bullyboys to give Quigley a beating and chase him off. When that doesn’t work he orders him killed. That was a big mistake. Quigley sends for his deputy, Murray Fishbourne. Together they take on the gunslingers the local sheriff and anyone else McRae cares to send against them. The dead pile up as the fighting intensifies. Against such odds can Quigley and Murray survive?