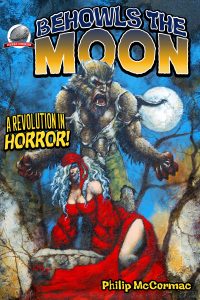 It is 1916 and the winds of rebellion are rising in Ireland as Easter Sunday nears. Sick of British rule, Irish freedom fighters plan to strike while England is supposedly pre-occupied with the war in France. Meanwhile, in the village of Carrybeg, young Rauri Mac Cathail operates a small creamery with his Uncle Ivor, a decorated veteran of the Boer campaigns in Africa. Weeks before Easter, Rauri is attacked by a gang of local thugs jealous of his romantic interest with the lovely Aishling O’Hagan and they beat him severely. Left to die in a ditch, Rauri is found by the hunchback orphan, Damian Hughes, and brought to Ina Riley, an old woman with healing skills. What people do not know is that both Ina and Aishling are werewolves and the only way they can save Rauri is to make him a changeling as well.Mixing wild horror fantasy with factual historic events, writer Philip McCormac weaves a tale of drama and passion that is pure pulp magic. One readers will not soon forget.